With so many big series and high buy in tournaments we can find across all sites, there is always a tournament we would really like to play and compete for big prizes, but it can happen that it’s outside of our bankroll.

That’s when a lot of people turn to satellites to try and win an entry to such a tournament. But the situations that arise when we get close to winning a ticket are very specific and can be tricky because of the high ICM implications.

Even though ICM is very much a factor in normal MTTs when we get to the final table and even before that, it’s nothing close to how it affects our game in satellites.

Since all of the prizes are the same it doesn’t matter whether we finish the tournament as the chipleader or with just one ante and players often make huge mistakes to which we have to adjust to avoid losing a lot of EV ourselves.

Let’s first take a look at the situation that we’ll be studying today.

Chip leader to our left

There is 6 players remaining with 5 tickets in the prize pool. Hero is sitting on the BTN with 12bb, there are 2 shorter stacks that have 8bb each, 2 players have a middling 25bb stack and the chip leader is sitting to our direct left with 35bb.

First we have to look at how our shoving range would look like if we would be playing versus competent opponents. 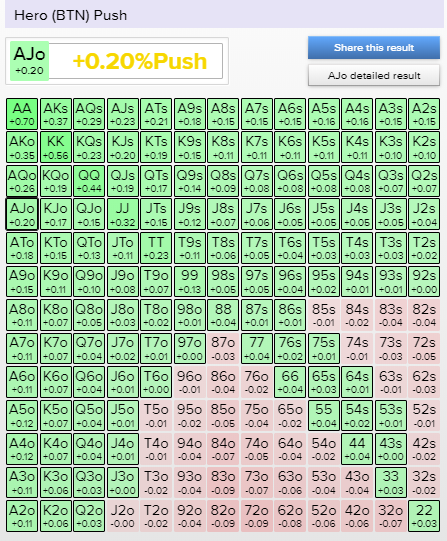 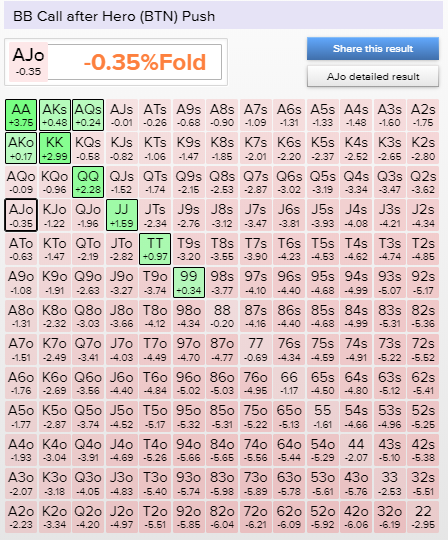 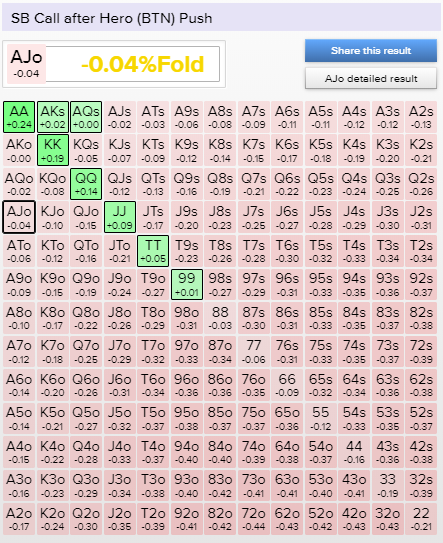 We can see that we can be very aggressive in this spot shoving 68% since both the small and the big blind can only call 3,3% and 4,3% off their hands because of the heavy ICM implications.

However, players tend to make pretty significant calling errors in such spots by calling too wide which in turn drastically changes our shoving range since we’ll bust more often and we want to avoid that at all cost. 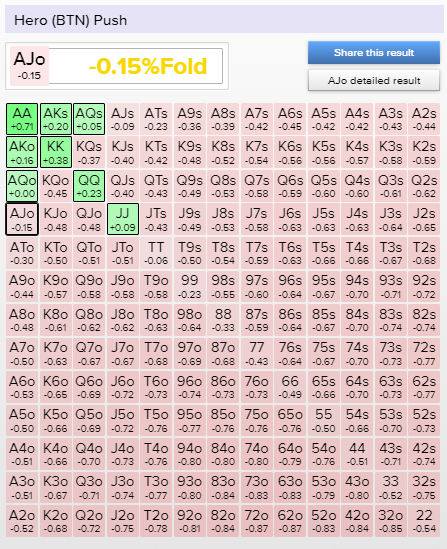 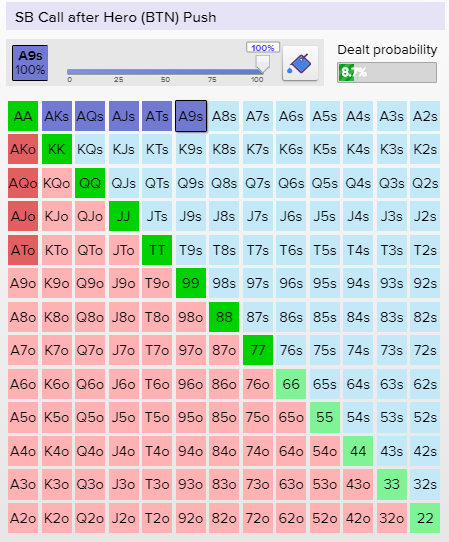 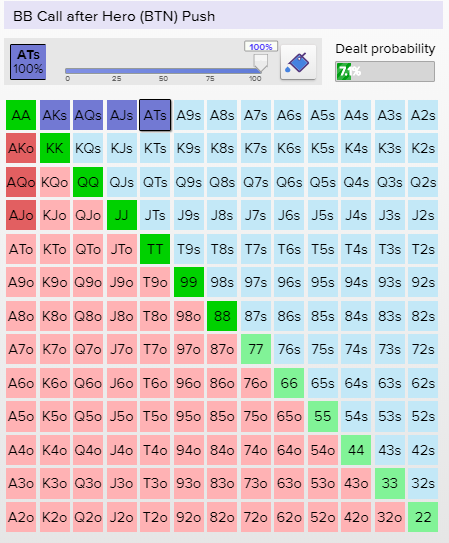 Here we can see that by widening calling to something more realistic - SB from 3,3 to 8,7% and the BB from 4,3 to 7,1% our shoving ranges changes drastically. When facing opponents that will be playing a nash strategy we can shove 68% of our hands where as now the only profitable shoves we have are JJ+ and AQ+.

This leaves us in a very uncomfortable spot where our hands are pretty much tied so we have to come up with a better solution. The most logical thing to try and do would be to start minraising to try and take more pots down preflop while still staying protected when facing aggression. 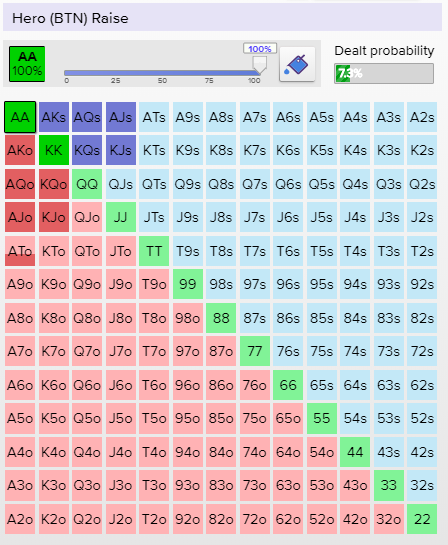 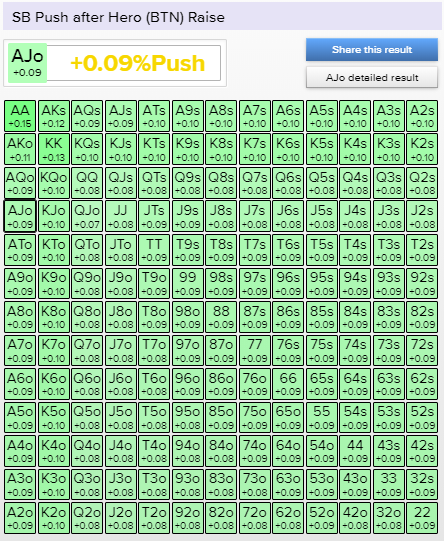 In a nash environment we still have to be pretty tight - we only get to open 7,3% and call with only KK+ even though the opponent in the SB should shove any two cards.

This is ofcourse the worst possible scenario for us with the chip leader being to our direct left and it would change if the stack distribution was different. But even in this setup I wouldn’t expect the SB to be shoving this wide so we can open some more hands and try to take the pot more often. 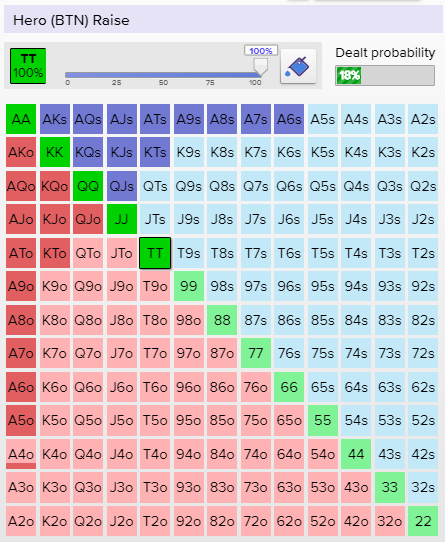 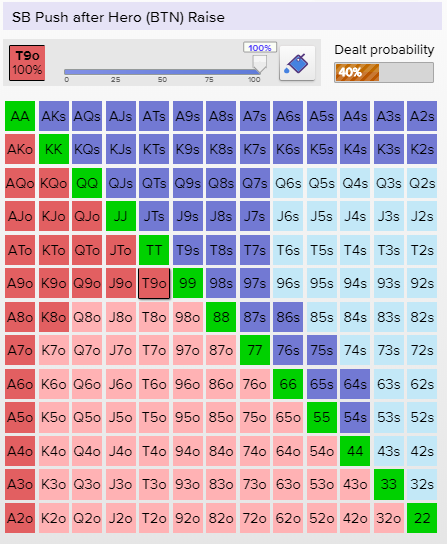 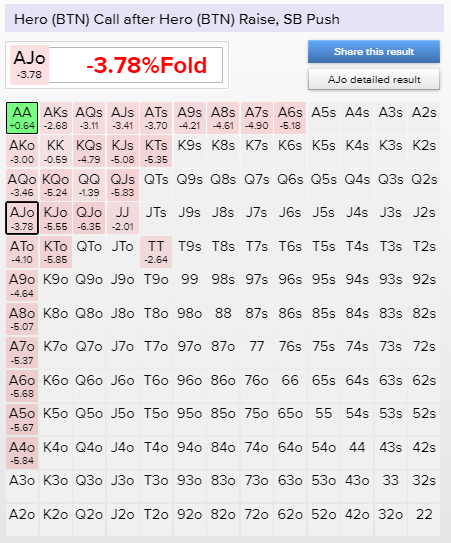 If the SB shoves 40% of his hands when we minraise the BTN we can see that we get to open 18% of our hands but since the shoving range is more narrow we can only call with AA.

But in a situation where every bb we can steal is very valuable to us this is still a better option than to just play a push/fold strategy where it’s going to be very hard to accumulate chips.

Now let’s look at a situation where all of the bigger stacks already folded and now we are facing the two shorstacks in the blinds. 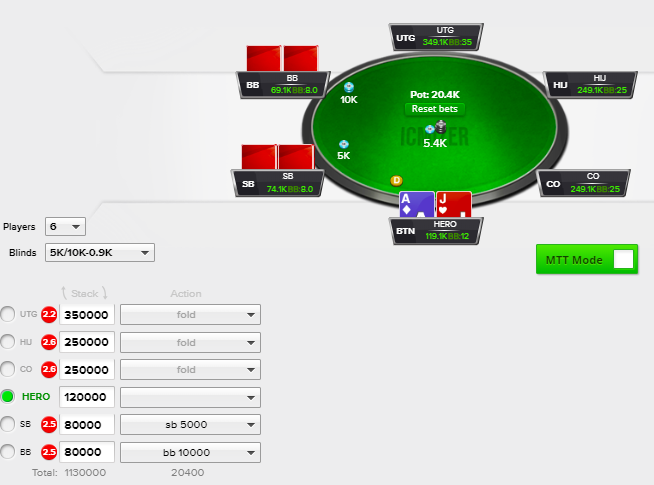 Obviously, if players would be following nash this would be a dream spot for us, where we could shove extremely wide but the same problem from the previous situation remains, where most of the players are going to be calling too wide and that would force us to start shoving tighter.

Again a good response to that would be to start min raising since there usually isn’t a big difference between a call vs shove and 3bet shoving range when facing an open from our opponents. Also another thing that works in our favor is that we are not committed to calling the rejams wide because of the ICM implications. 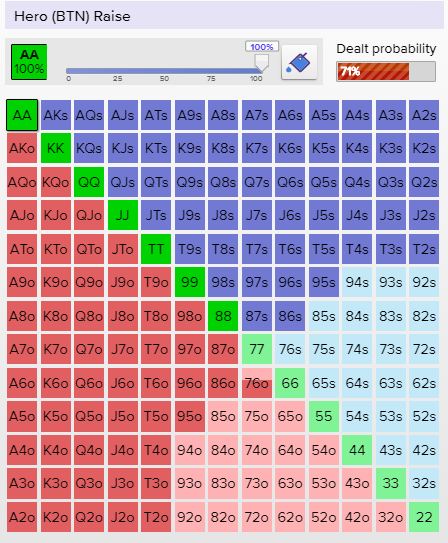 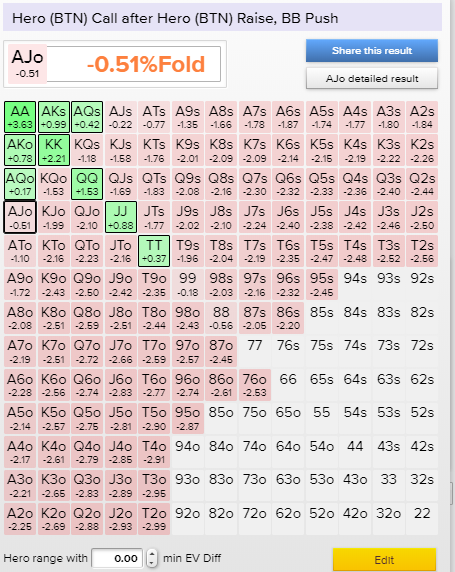 We can see that if the SB doesn’t try and punish our minraising and only rejams 12% which would be very expected from a lot of players we can open 71% of our hands and put the blinds in an extremely difficult position where they have to risk their tournament life with an equal stack still in the tournament.

To conclude, our gameplan in satellites or any other flat payout structure tournament should be to try to take as many pots as we can without showdown.

Nature of the game is that almost all-ins between players benefit others at the table more than those that get their chips in.

Also since chip accumulation is not that important due to flat payouts, we just want to make sure that stacks that are shorter don’t chip up. If a big stack is doing his job min raising all the time, we should just stay tight and wait for others to bust out of sat and if the chip leader is folding, we should exploit that by minraising very often.

If we get called prefop, just continue to apply pressure postflop, again preferably without putting all our chips in the middle .

GL at the tables!