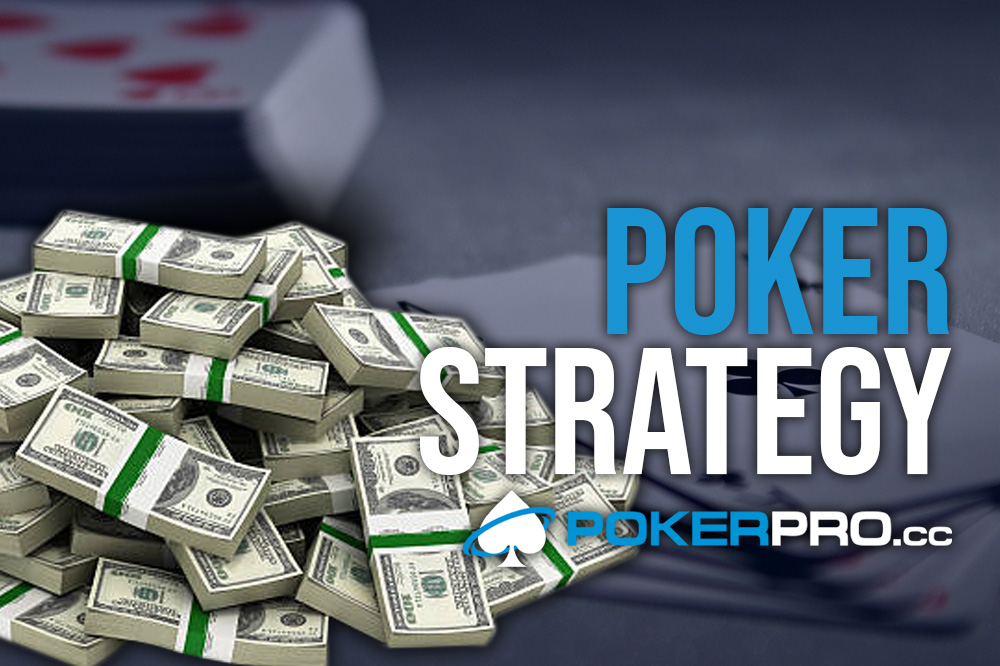 No two poker sites are alike. There are so many things that differentiate sites, starting from software, promotions, but more importantly who regularly plays on the site, what kind of a player pool to expect, how to play there and which games to pick. That’s why it’s good to know, which poker site is best for you.

The things that should influence your decision on picking a site are promotions, rakeback or cashback, player pool, rake, use of 3rd party tools, VIP deals, etc

888Poker is a site that allows the use o HUDs and it offers a maximum rakeback of 36%, which is not easily achievable for all players, so most will get less than that.

We can say that player pool is in the middle if we talk about amount of bad players at the table. 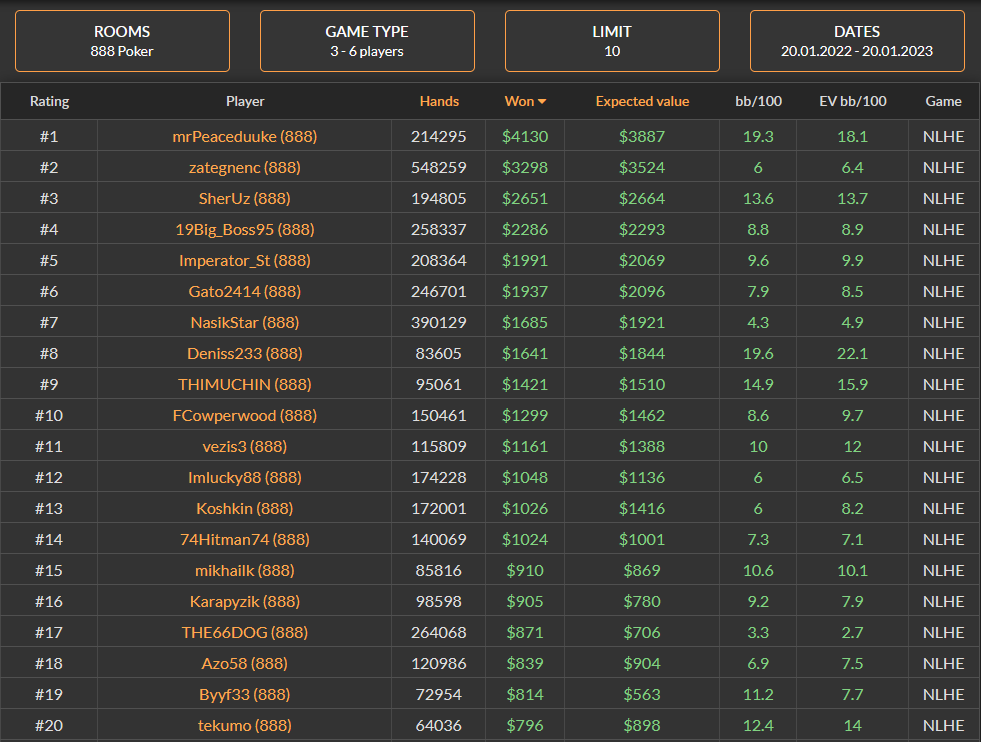 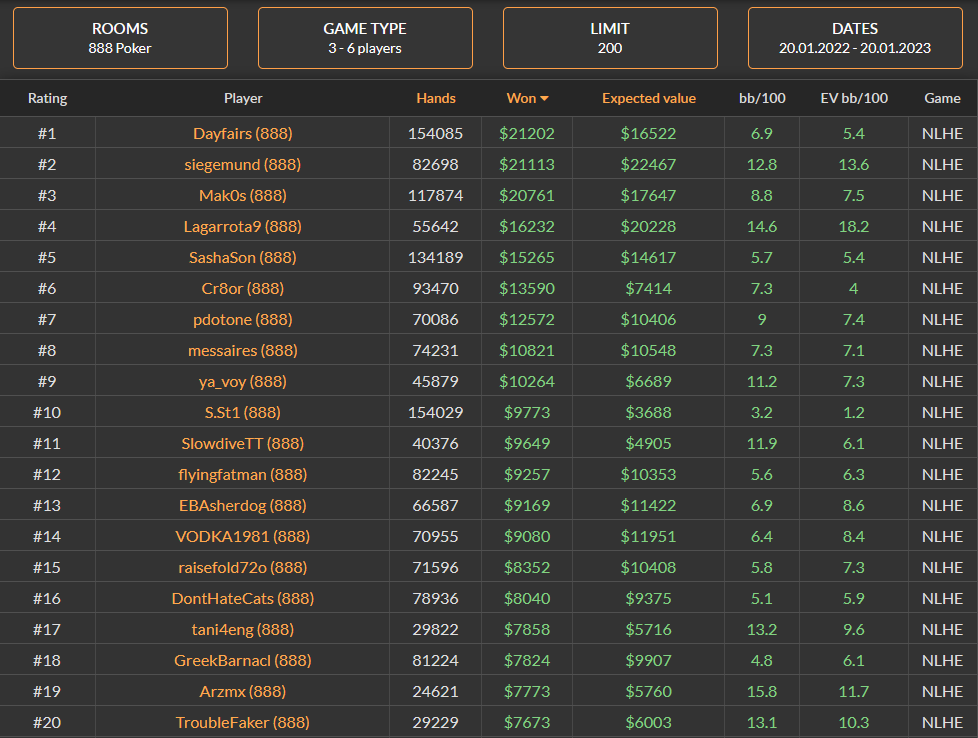 The winrate for the top few individual players is the highest across the sites, but in general annual earnings are a bit lower, due to lower traffic at the tables.

GGNetwork (Betkings, GGPoker, Natural8) is very specific site where most of the winrate can come from leaderboards, rakeback and promotions like jackpots, GGcare and other races. They don’t allow any 3rd party software.

Here are the winrates for the top players at GG: 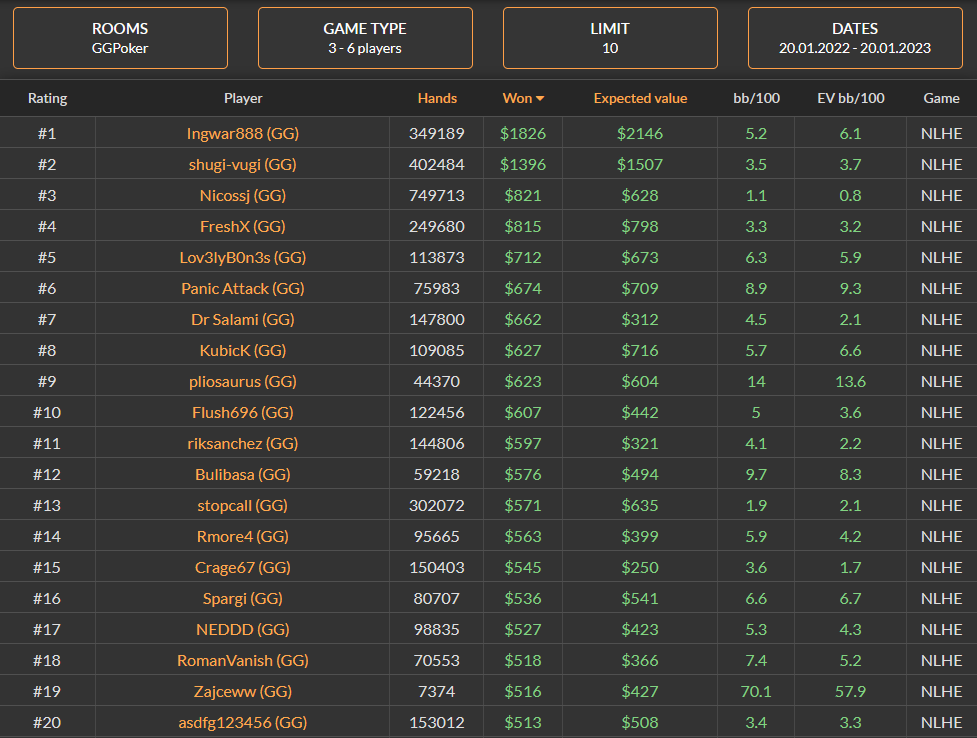 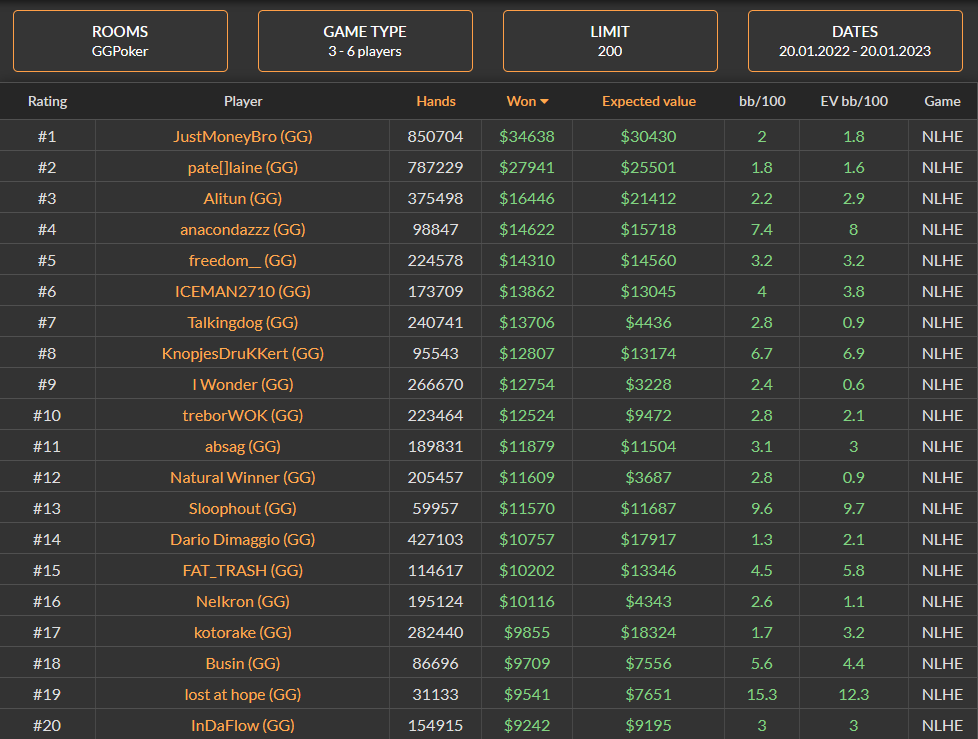 Because most of the profits come from other sources outside the poker table, GG is a bit difficult to compare with others.

Even though winrates at NL10 are at around 5bb/100 and for NL200 at around 3bb/100, players actually earn more money at the end of the day than on other sites.

Our assessment is that winrate on GG are the highest of all sites for the best leaderboard grinders – check our article how to win these type of leaderboards.

iPoker Network (Guts Poker, betfair, RedStar poker, bet365, Titanpoker, betsafe, betsson) is a site where on average we can see one of the lowest winrates at NL10 and NL200, as iPoker also provides a build-in HUD display that players can turn on or off.

Rakeback on iPoker is very important to have and it varies from site to site, so make sure to contact us to get the best iPoker VIP deal! 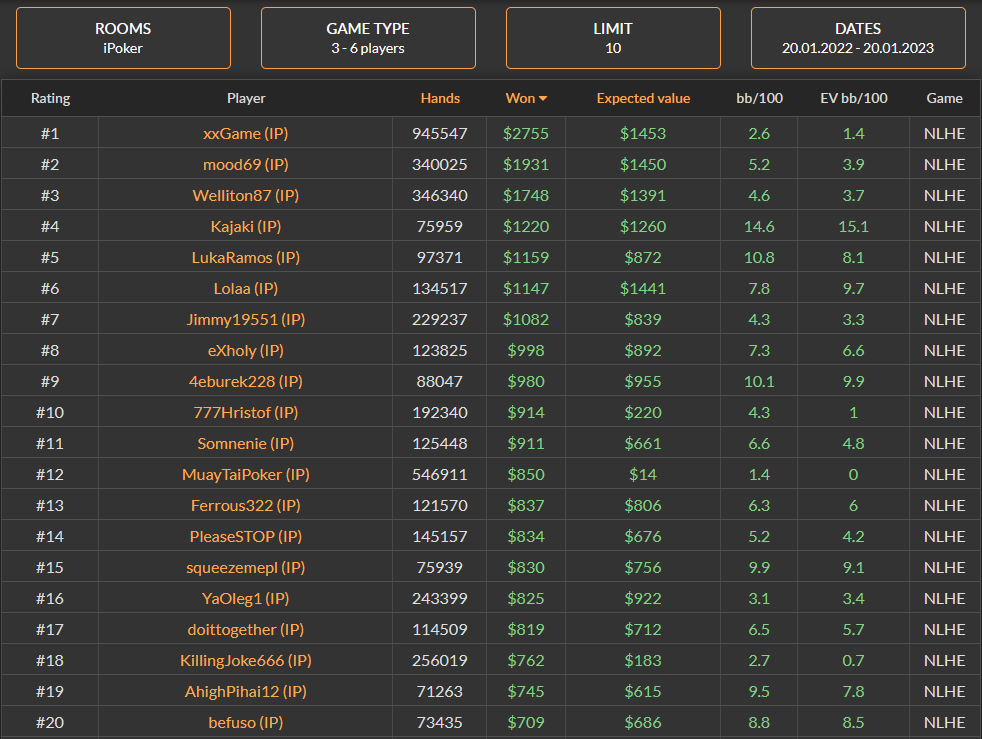 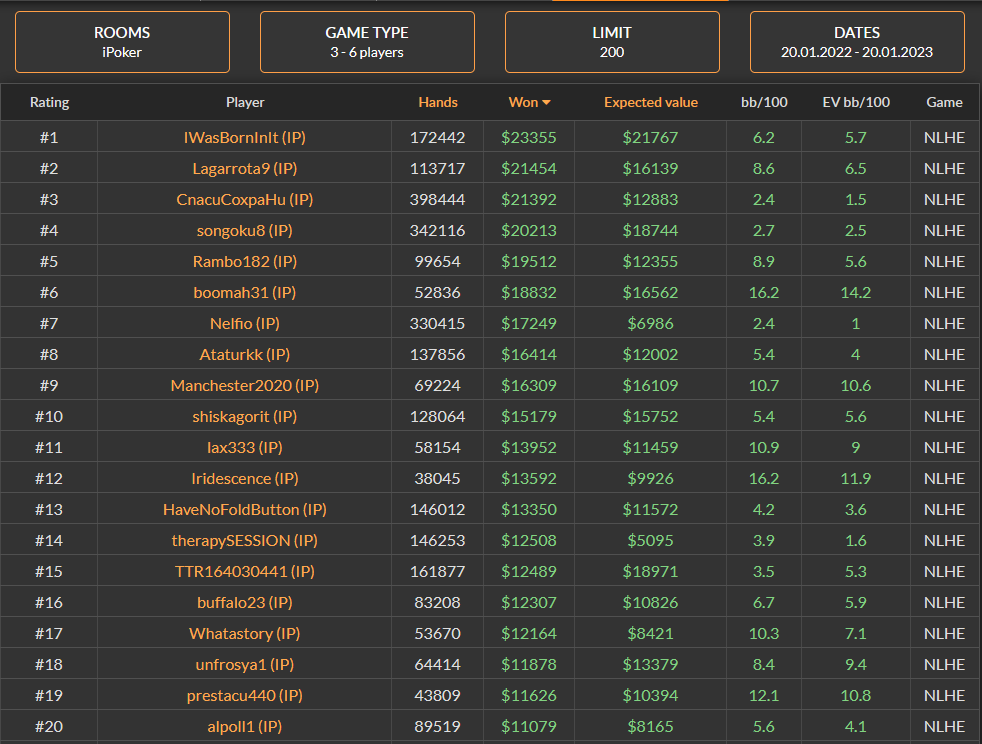 Winrate on NL10 is around 7bb/100 and 5-6bb/100 for NL200 players. Volume in last year was a bit lower than on other sites, but iPoker has doubled in cash game traffic just in the last few months due to parthership with smaller sites.

PokerStars allows the use of HUDs and only basic preflop charts. Rakeback is at topped at 25% + a monthly poker challenge worth additional 40%, which pushes your limits further each month. 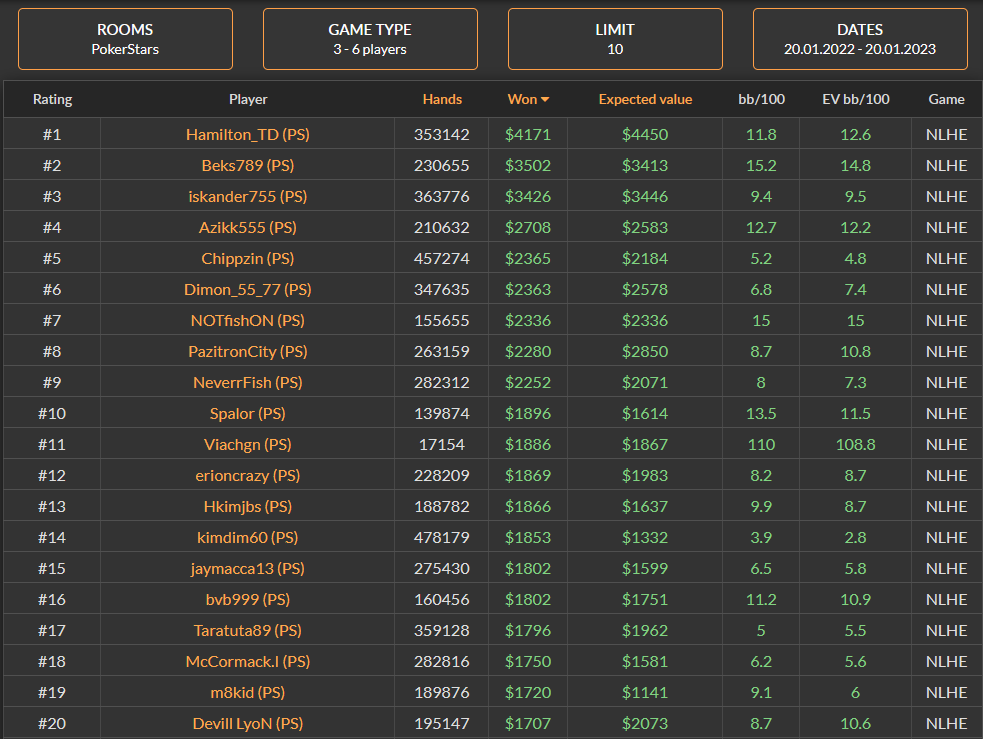 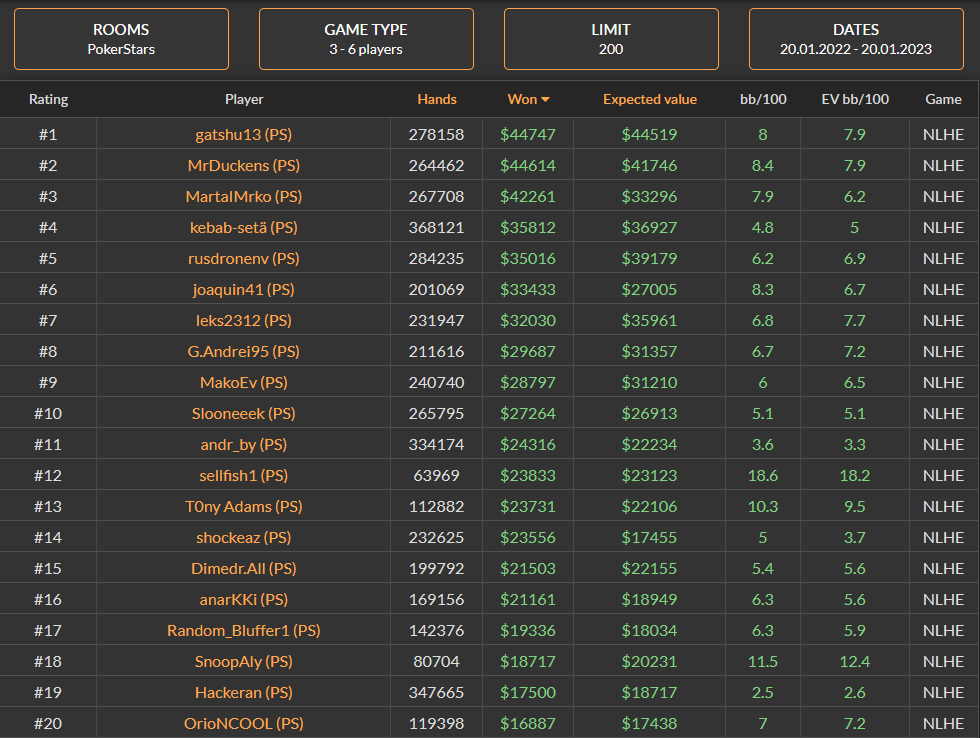 Player pool is probably the toughest across all sites, but rake is more favorable for the players.