Today we’ll be looking at raise and calls 3-bet shoves on the final table and how ranges change when facing different opponents and stack figurations.

These spots change a lot when we start adding ICM to our decision - similar to shoving and calling shoves which we already looked at in a previous article.

When approaching these spots it’s important not to only focus on hands we are going to call the 3-bet shove with but take a step back and think about our opening range first so we don’t need to fold too big of a portion of our range when we do face the shove. 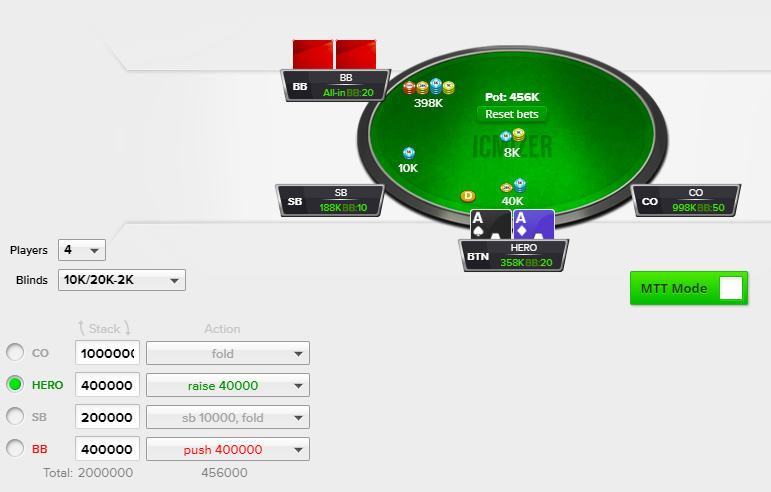 Again we are at a final table with only 4 players remaining. There is a big stack with 50bb, a shortstack with 10bb and we are equal middle stack with 20bb.

In this situation the bigstack on the CO folds, we open the BTN and face a 3-bet shove from the equal stack player in the BB. As said before the things we need to consider are: our opening range, the BBs shoving range and what hands we’ll call the shove with.

First let’s a look at our opening range. 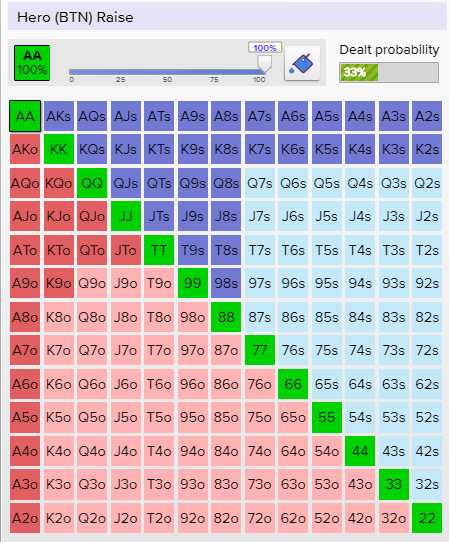 Since the players behind us have to take ICM into consideration, we can still apply a fair bit of pressure and open fairly wide - as we can see around 33% which is still less then we would open without ICM which would be around 40%.

Next let’s take a look at responses when facing shoves from different types of opponents in the BB. 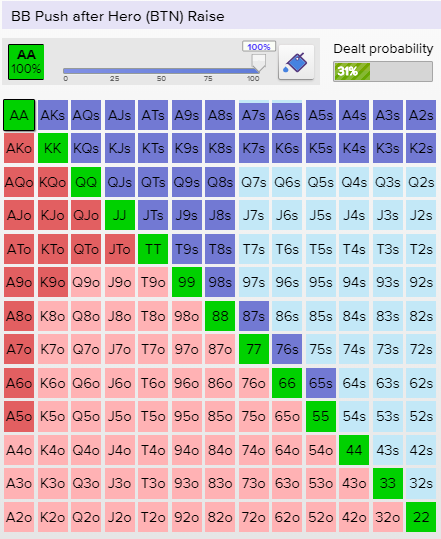 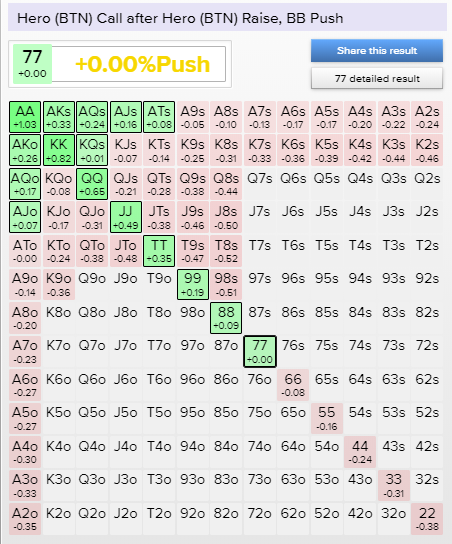 If the BB is playing in accordance with nash equilibrium he gets to shove fairly wide - 31% since we are very dissincevised to have a collusion with him because of the shortstack in the SB which is also the reason we open slightly tighter then we normally would.

As you can see we only call 77+ ATs, AJo and KQs because of that. With that being said we can see that 77 and KQs are very borderline calls which mean we can easily start folding them if we expect the BB is a bit tighter. 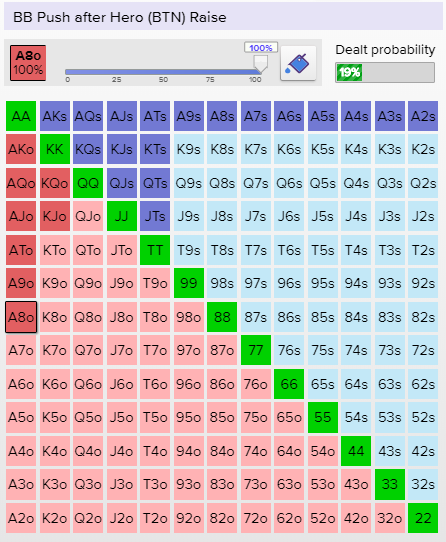 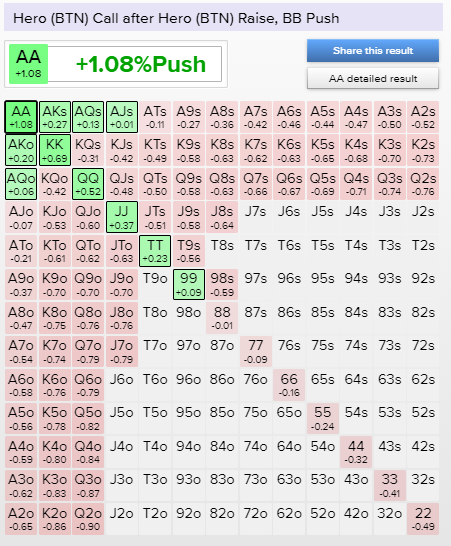 If we perceive the player in the BB to be on the tighter side it’s fair to assume he would be shoving something similar to the range we have above - 19% which would include all pairs, A2s+, A8o, suited broadways and KJo. Since this range is quite strong and we need more equity then usual because of ICM  we only get to call 99+, AJs+ and AQo which is only 5,5% of hands.

Even though we have to fold most of the hands we opened vs this kind of opponent when facing a shove we are not going to face it very often and so we’ll get to pick up more pots preflop if they defend the BB to tight or play a lot of pots in position which gives us a big advantage postflop where we will over realise our equity and be able to outplay him.

Because of those reasons we actually get to open wider - up to 50% or even more if we are comfortable with our postflop play - and put a lot of pressure on our opponent. 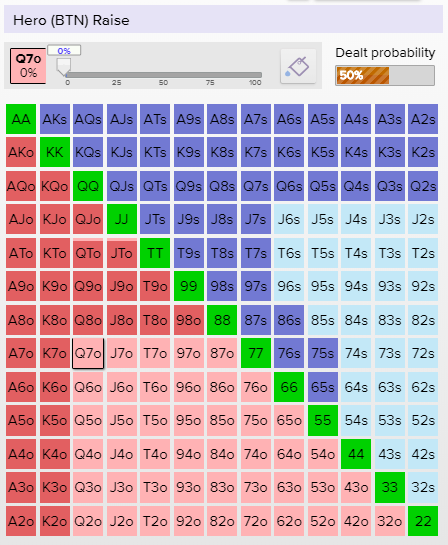 Now let’s take a look at how important of a concept stack distribution is. 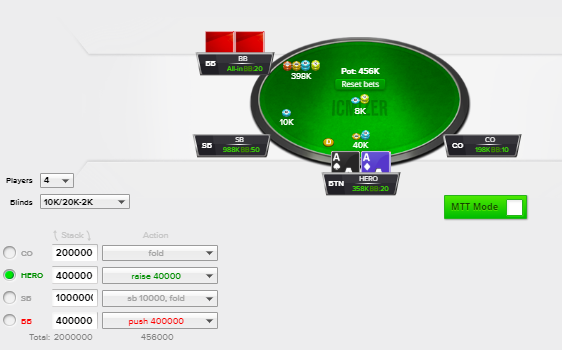 We’ll be looking at the same spot except that the player in the SB is now the chipleader who was previously on our left and already folded and see how that changes our play. 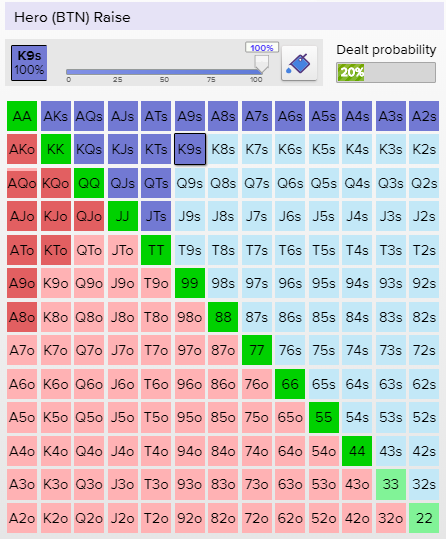 We can see that our open raising range changes quite significantly from the previous example - it falls from 33 to 20% just because of that change. This has to do with the fact that the chipleader can punish our opens by 3bet shoving extremely wide.

If we don’t adjust and open the 33% we did in the first example, the SB gets to shove 63% and we can still only call with 7,2%, which would make us bleed chips and we defend vs that as mentioned by tightening our open raising range and by doing so we then fold less of the time when we invest chips in the pot. 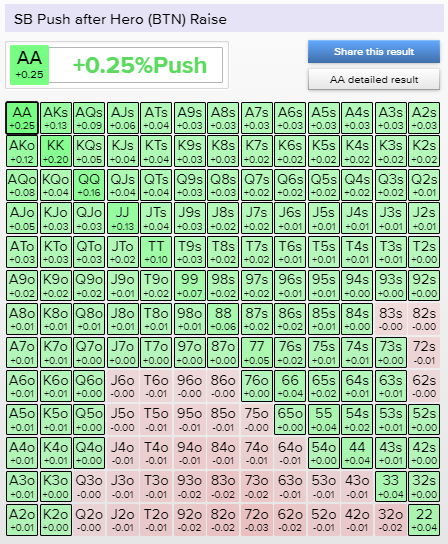 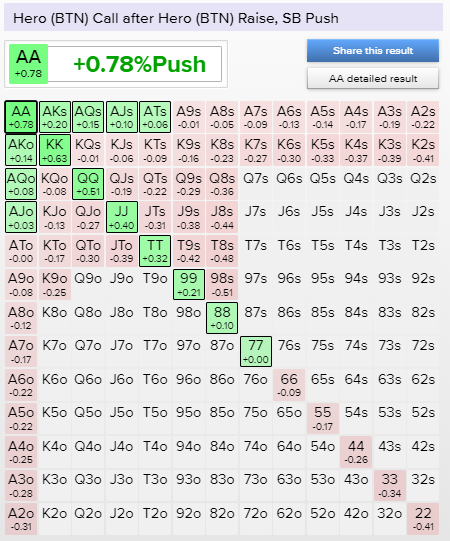 In turn the BBs strategy has to change as well. He has to recognise that we will be opening tighter because of the stack distribution and he has to start shoving tighter since now his shove won’t get folds as often and he’s at a bigger risk of an unwanted collusion with us. 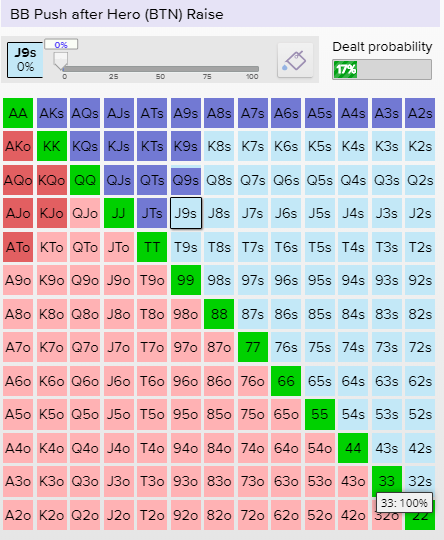 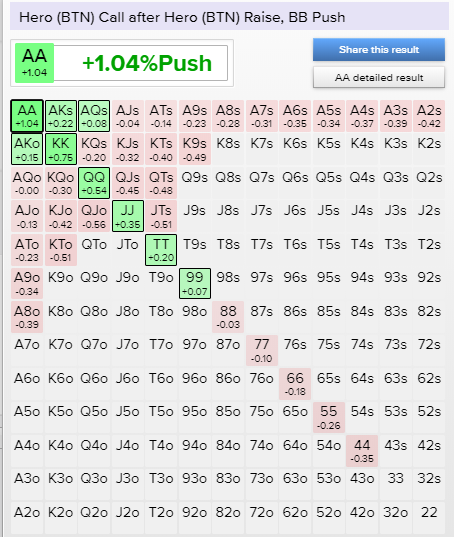 He can now only shove 17% of hands from the previous 33% to be playing in the nash equilibrium and we call 4,4% since his 3beting range gets tighter.

If we feel that the BB hasn’t adjusted to the new dynamic and is still showing a wider range we can just call with the same ranges as we mentioned in the first example and we’ll be automatically making money since we now have less folds vs his shove and he won’t pick up the pot as often.