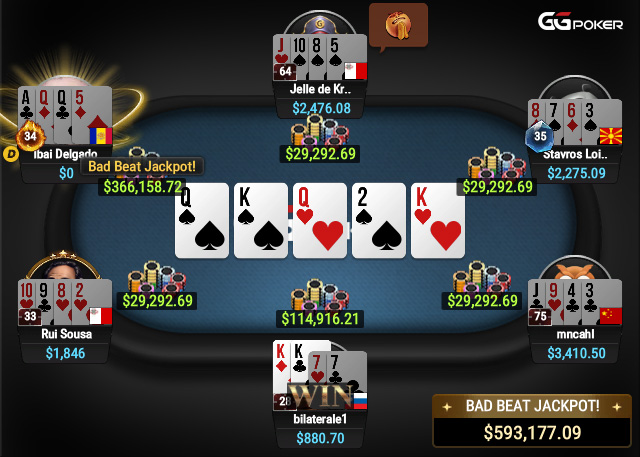 GG Network (Betkings, GGPoker, Natural8, 2bet4win) seem to break some sort of record every month and this week they smashed their own record for biggest ever bad beat jackpot. Two players scooped six-figures scores at the PLO tables.

Ibai Delgado received the biggest share of the jackpot for having the losing hand as he scooped $366,158.72, while bilaterale1 took down $114,916.21 for having the winning hand with quad Kings. In some ways the happiest players in the game may have been the other four, who all captured $29,292.69 for doing nothing other than sitting at the table.

Watch the hand down below

Both biggest winners are Betkings players and biletareale1 is also a member of PokerPro! If you believe it or not, this is his second Bad Bead Jackpot hit, the first one came in October 2021. That one also hit on $10/$20 PLO table and the BBJ was at $585,376.21 the biggest one at that point. Bileterale1 was the winner of the hand with a straight flush and received $125,895.38.

"It looks like I'll have to make a Hitting-Bad-Beat-Jackpot 101 course", said bileterale1. "Can't lose a hand, though!"

But the last BBJ that made in the news was hit in December when a streamer managed to win the jackpot of $34,135 live on Twitch when his quad nines lost to a four of a kind Queens. phil_sn was doing a bankroll challenge, trying to grind from $250 to $25,000. He started playing the lowest limits of $0.02/$0.05 Rush&Cash on GG and hit TWO jackpots in consecutive days, finishing the challenge in style.

The GGPoker Bad Beat Jackpot is triggered whenever a No Limit player loses with AAAKK or better. In PLO or Short Deck the losing hand must be Quad Nines or better and in PLO5 it must be Quad Jacks or better. The hand must go to showdown, both hole cards must be used and for Quads the player must have a pocket pair, the board cannot run out Trips or Quads.