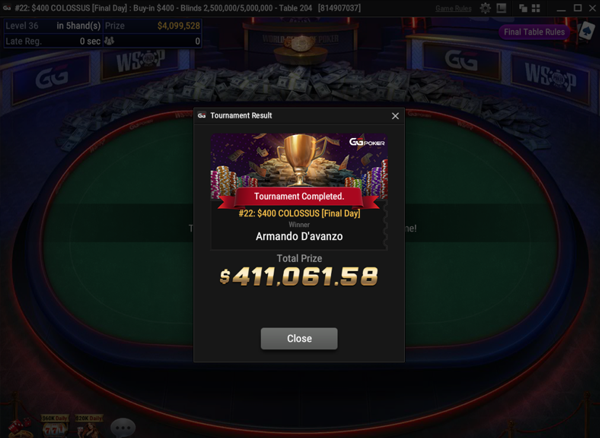 The headliner coming into the final table was Damian Salas, who is no stranger to WSOP success. The Argentinian pro burst onto the live poker scene when he final tabled the 2017 Main Event, earning $1,425,000 for his seventh place finish. However, he is best known for winning last year's International WSOP Main Event for $1,550,969, and also defeated Joseph Herbert heads up for an additional $1 million. However, Salas had a big bluff picked off early, and then busted in 9th after flopping a flush draw.

D'avanzo laid low for the first half of the final table, content to let the other big stacks duke it out. He would take his first big step towards victory when he won a big coin flip to knock out Tarun "AreYouAhead" Goyal.

However, it was the knockout of Kenneth Smaron in fourth that was the biggest of the final table for D'avanzo. In that hand, he would flop bottom set of fives, and all of the chips got into the middle is what was at the time the biggest pot of the tournament.

D'avanzo continued the big knockouts when he busted Mirko "25Ezekiel17" Numerato in third. It was a cooler after the flop, as D'avanzo had bottom two pair against the top pair of Numerato.

After a heads up battle that lasted about half an hour, D'avanzo won the event in style, flopping a king high flush to crack the pocket aces held by Kosuke “PXR-51” Tajima.

Not much is know about Armando D'avanzo, who's only big score before this appears to be a WSOPC High Roller Event on May 13th, earning $43,875. Well, this new high score is nearly ten times that, along with of course D'avanzo's first ever WSOP bracelet.