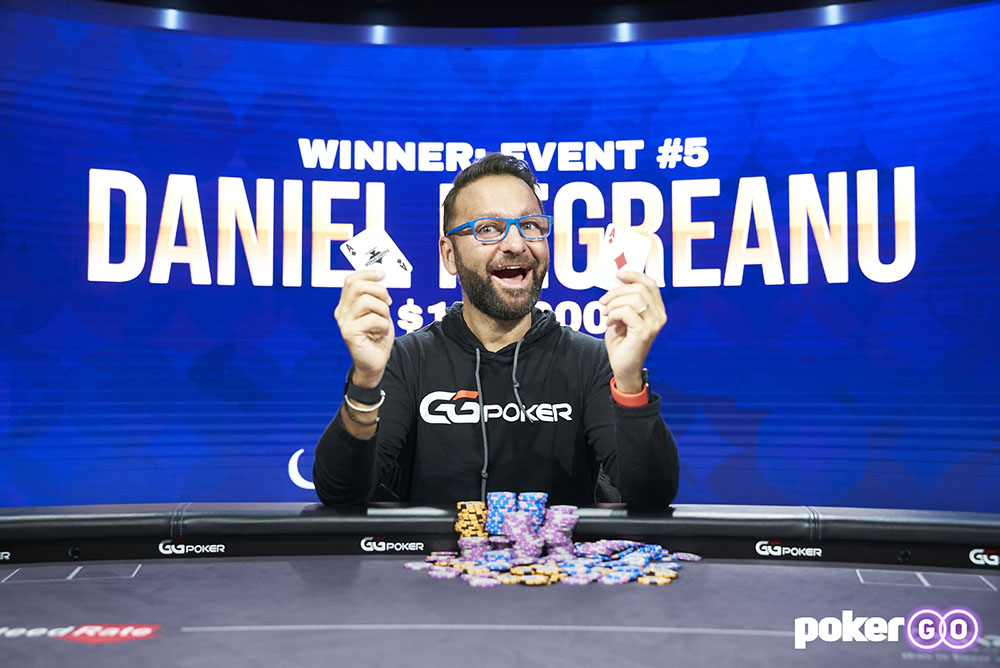 Daniel Negreanu has won Event #5: $10,000 No-Limit Hold’em at the 2021 Poker Masters, scooping up $178,200 in prize money and moving to the top of the series leaderboard. Negreanu defeated Nick Petrangelo in heads-up play.

Earlier this year in July, Negreanu was crowned the inaugural PokerGO Cup champion. He cashed four times in that series, including winning Event #7: $50,000 No-Limit Hold’em for $700,000. With 281 points through five events, Negreanu is now the frontrunner to win the 2021 Poker Masters Purple Jacket, which is a title he very much wants to win.

“It’s huge,” Negreanu said of moving to the top of the Poker Masters leaderboard. “Poker Masters means a lot to me because I remember the first one that they had. I remember it was the first moment that I realized, ‘Oh my god, these guys are just better than me.’ It made me realize that I have to go back to the lab and work. Then to see the work pay off in the PokerGO Cup is awesome. To go back to back, with a chance now to come full circle and win the jacket, I really feel strongly not only that I can but I feel like I’m going to win it. I feel like I’m running well and everything’s going good.”

“Well, this is the hard part about poker, right?” Negreanu said when asked about how things have been going on the felt for him recently. “I’ve been telling people for the last year that I’m playing really, really good, I swear. But if you don’t win, people go, ‘Yeah, yeah, I’m sure you’re just unlucky, right?’ So people don’t buy in unless you actually start posting the Ws. For me, it’s vindication of something that I already knew. During this stretch of the worst stretch of my entire life when it comes to luck, and I know this – from the Doug match to Hellmuth, to all the tournaments and stuff, I know the reality of it. But for the public, I think, there’s proof in the pudding. They want to see results. That’s all they care about.”

If you’d like to relive all of the action from the final table, you can find the replay on PokerGO.com.