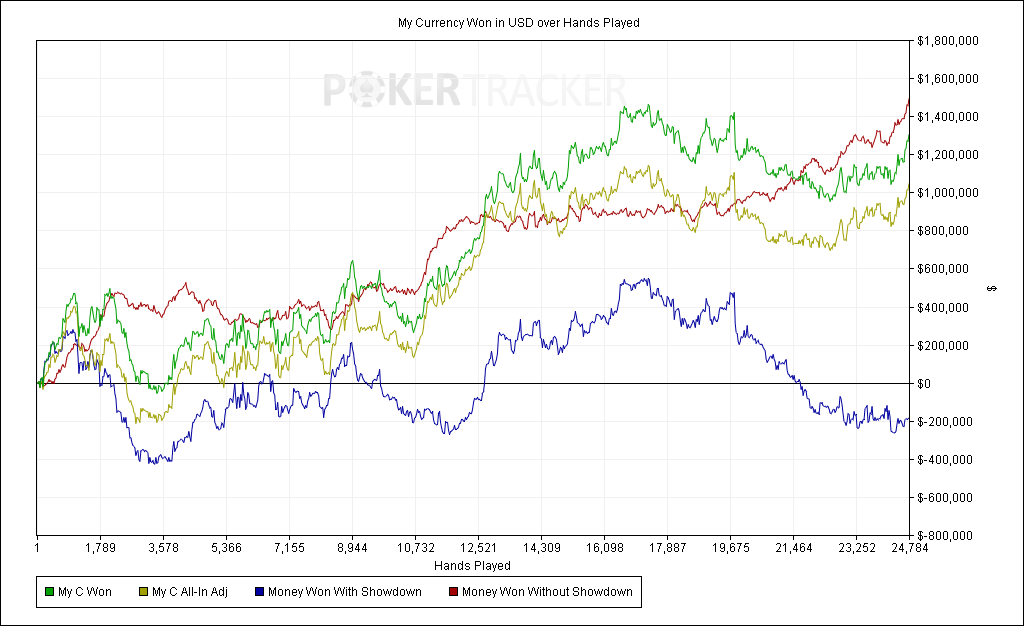 Doug Polk shared on Twitter the stats of how well he ran in his 1.2 million dollar win against Daniel. The match started back in November 2020 and ended 4 months or 25k hands later on February 3, 2021.

Negreanu is still claiming that he ran a lot worse than Polk, while Doug claims the opposite despite winning $1.2 million.
And these stats might actually prove that he is right.

Challenge Graph (not including live) pic.twitter.com/PYd8y6h9es


If you look at the red line, which indicates Money Won Without Showdown, you can see that he won the majority of his profit in this statistic. This is usually a really good indicator of skill, because it means you forced your opponent to muck their hand.

But if you look at the blue line, which indicates Money Won With Showdown, you can see that Polk is actually in the negative numbers. This stat includes all the hands that go to showdown, even the ones we couldn't track in our All-in EV spreedsheet.

Well, the good news is that as it looks like we were actually correct and Daniel ran just about $250,000 below all-in EV, according to the graph above. Note that this graph is missing 200 hands that were played live in Poker Go studios, where Negreanu won $116,500.

Here are some other statistics he shared

The only 2 things I was particularly good at were turning gutters and rivering sets. Which I think if you watched the challenge, you might have already known that lol.

You can tell by these stats that he was below the average of hitting hands in almost every stat. He finished his twitter thread by pointing out that he's surpised that Daniel lost only $1.2 million.


So what comes next for Doug Polk?

Polk received a number of challenges (including Bill Perkins and Dan Bilzerian), but he declined them all, which a lot of people don't understand, since he would probably crush a lot of the players that challenged him.

Additionally Im not going to take on other challengers. As tempting as it is to have to lay 20 million vs Dan Bilzerian or pay Bill 22 bb/100 (Great offers guys), I'm not interested in playing either of them. I dont think id play either of them at even money much less pay vig


Actually what comes next for Polk, is that he is starting a Counter Strike – Global Offensive team, in which he will also play in. You can read more about it this article.

Last but not least.

It seems that Polk's partner at Upswing Poker Ryan Fee also had some action in this match. What he did with some of the winnings is a next level stab at Negreanu.

The problem with Lamborghini's is that normally they are too expensive...


Negreanu did not respond to any of the tweets yet.