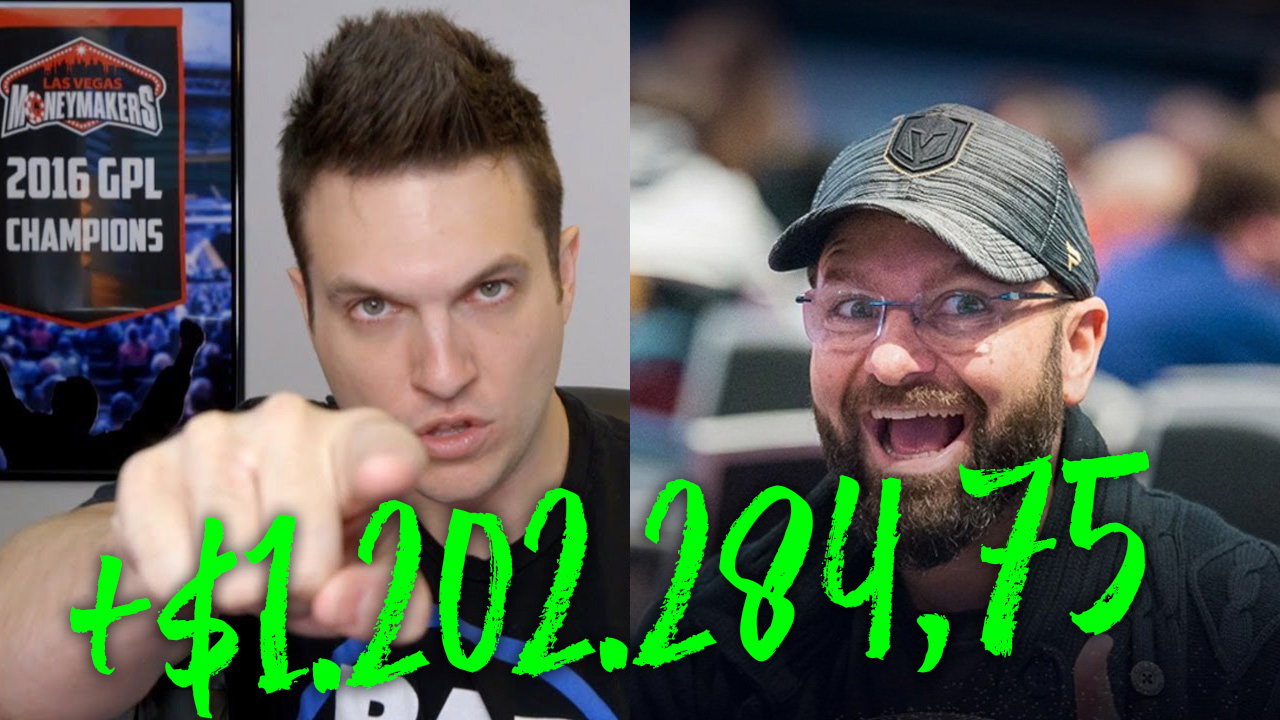 Entertaining match for all poker fans

It’s a result that pretty much everybody expected, but the journey to this point was still a very entertaining one for poker fans. On and off the felt.

Daniel had a good start winning $116,500 in the first session that was played live in PokerGo studios, then came a run of unfortunate losses for him in some all-in spots, which culminated in epic rant videos.

Doug started to pick up speed and almost closed a session #18 with a million-dollar mark profit over 9950 hands. At that point Negreanu’s mini-comeback commenced, winning half a million in the next 5000 hands, while still running 7 buy-ins below all-in EV (more on that later).

So far in the Grudge Match it seems that pair was on a fairly good terms, but their "relationship" turned sour when in post-session interviews Daniel couldn’t stop talking how lucky Doug was or how unlucky he is. Of course, Doug didn’t take this lightly and mocked Canadian for his comments, saying the complete opposite is true.

In the meantime Polk was at million dollar profit once again, but Negreanu made a final push with what he said was a monkey-style poker, but to no avail as American finished strong in the last two marathon session, ending with $1.2 million in profit.

As you probably already know, we’ve been collecting data and tracking all-in hands since the beginning of the match. You can check all of them in our google spreadsheet.

Here’s the graph since the beginning of the High Stakes Feud, showing winnings in green and All-in EV adjusted winnings in orange, both from Daniel’s perspective. 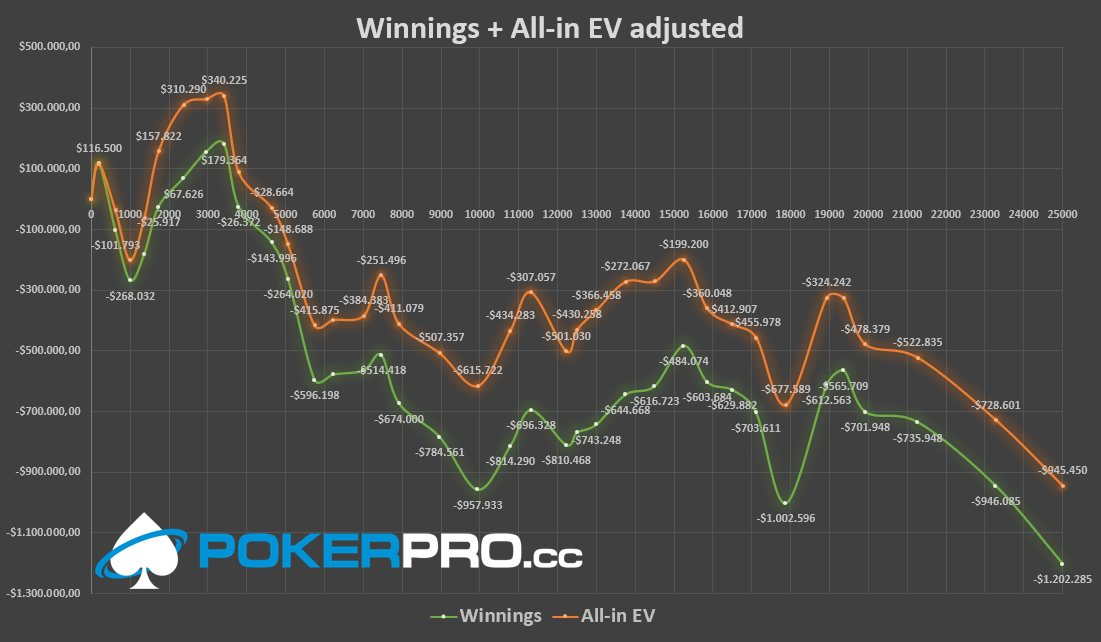 And here’s a bb/100 graph. We’ve cropped out first few sessions, because winning 150bb/100 in first session totally distorts the layout of the graph. 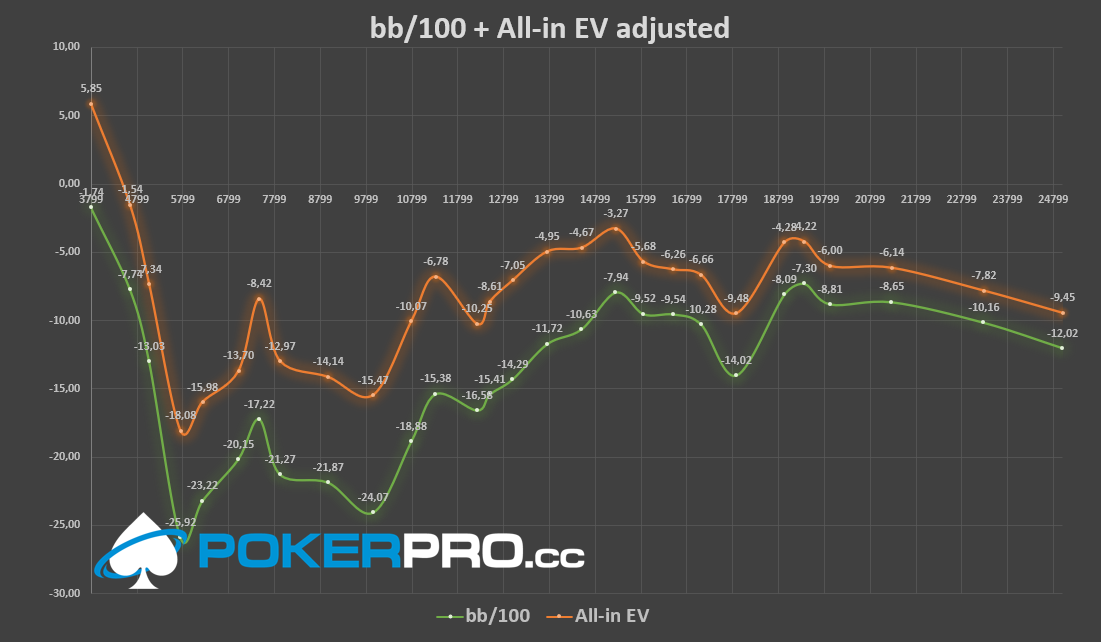 While the all-in EV number was more interesting in previous sessions when results at that time were closer, we can still extract some interesting data out of it.

Obviously still a significant win for Doug Polk, but if his edge over Daniel Negreanu was at 9.45bb/100 (we have no idea if that’s true, but let’s play with this number anyway) and if standard deviation for HUNL is at 150bb/100, he still has about 16% chance for a loss in 25,000 hands due to variance. So, if you’ve made a bet of 5:1 or higher for Daniel to win, it might have actually been a profitable bet. Betting market had Doug at 4:1 favourite.

Doug’s EV in this match falls right into one standard deviation of 70% confidence interval. Scientists would say that this match ended up in statistical tie, which might be a bit of a déjà vu for him. In 2015 a group of professional poker players, lead by Doug Polk, won collectively $732,713 against Carnegie Mellon’s AI in 80,000 hand contest, which was apparently still not enough to not call it a statistical tie.

It’s no secret that Daniel wants a rematch against Doug or even an extension to 100,000 hands played, but Doug is adamant that he’s done with playing poker as he’s way too burned from all the study, prep and play and doesn’t enjoy the game anymore.

Though, he is willing to coach the next DNeg’s opponent, if a scenario arose where Daniel wants to play someone else. After the match, Polk shared his true thoughts on how Negreanu played. Watch it in the video below.

And it also seems that the guys buried the hatchet at the end.

We have talked hands and stuff here and there from the get go, but today we really talked about a bunch of different situations and spots from the challenge.

Glad we buried the hatchet. A worthy opponent 💪 https://t.co/mELUfjBFwD

Negreanu Continues His Excellent Form With a New Win for $216,000