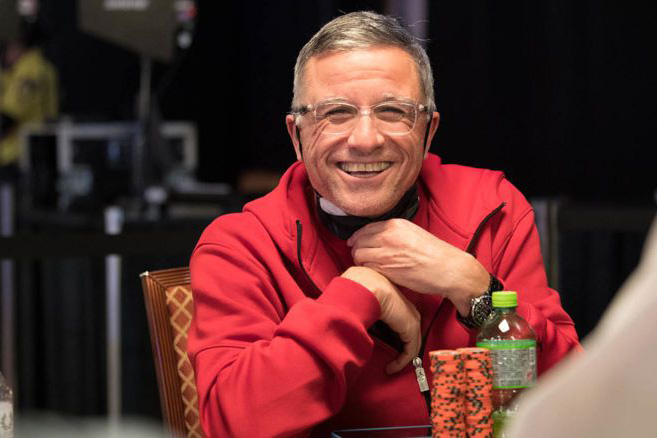 After an entertaining day where 10 players dropped to five, Eli Elezra finished the action top of the leaderboard with one day to go in the Poker Players Championship. The $50,000-entry event, which will conclude on Friday, November 5th after a day’s break, began the day with ten top players, all of whom had made it into the money.

Mike Wattel was the first player to be busted, exiting proceedings in 10th place for a min-cash worth $82,623 when he lost out to Paul Volpe and it wasn’t long before Daniel Negreanu busted too, leaving in ninth place for $91,595. ‘Kid Poker’ lost with pocket aces again after doing so on a dramatic Day 3, this time being shot down by Ryan Leng’s set of jacks.

Schulman’s exit for $106,120 in eighth took place against Chris Brewer, who seemed to grow in power throughout the day, while Matt Glantz, who busted in seventh for $128,256, may have gone out in a split pot by Leng and Elezra, but he was trolled by Dan ‘Jungleman’ Cates on his way from the event.

There has been an eerie calm before me and @MattGlantz ’s battle… here is a pic of him laughing with his chips before I take them pic.twitter.com/BdMSNkpBAA


That left just one man to leave the party and miss out on the final five. Unfortunately for him and his many fans and investors, that was Josh Arieh, who left in sixth place another great score of $161,422 when his pocket queens in PLO were toppled by Elezra’s two-pair tens and sixes on the turn.

With five men remaining, here are the payouts for the players who made it all the way to Day 4 of one of the most difficult tournaments this year’s WSOP will host.

Of the five remaining players, it is Elezra who has the chip lead going into Friday’s showdown for the gold. With a massive 10 WSOP bracelets already won by the five players who will compete to get their name on the Chip Reese Trophy, Elezra’s four is one ahead of Volpe and Leng, each of whom has three to their name.

Neither Cates nor Brewer have won WSOP gold so far in their careers but now sit just four opponents away from doing so.

The final day will be streamed on delay Friday at 3 p.m. on PokerGO.