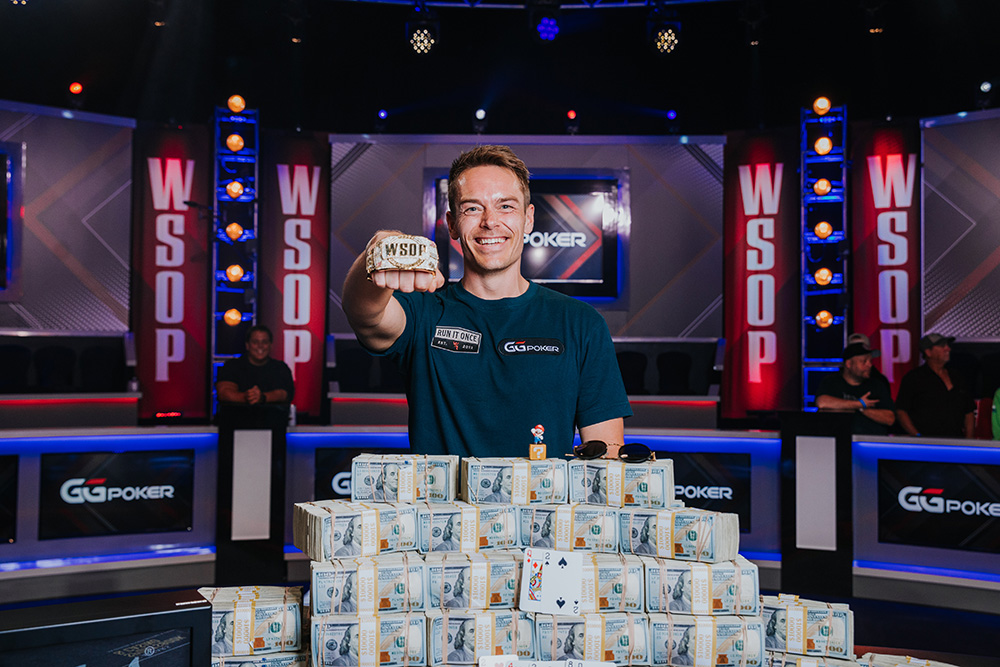 After nine days of play, Espen Jorstad is crowned world poker champion! At the last day of the WSOP Main Event, he faced Australian Adrian Attenborough and Argentinian Michael Duek, who were no match for the Norwegian who lifted the gold bracelet and pocketed $10,000,000 for the win.

Finishing in second place for $6,000,000 was Attenborough, who couldn’t put his hand down (again) and called Jorstad’s all-in after 8-minute tank.

Espen Jorstad puts Adrian Attenborough into the tank once more.

With his full house, Jorstad claims victory in the Main Event and the $10M first-place prize.


The first one to go in the last day of play was Duek. The top pair on the turn may seemed good for him at the time, but on the other hand it completed straight for the Australian. Despite losing position he threw in the remaining chip worth 5 million and accepted the bad news. At least he can take comfort in winning $4,000,000 money prize for 3rd.

Michael Duek turns top pair but it's a disaster card for him as Adrian Attenborough makes Broadway.

Duek would bet the river and Attenborough would move in for the rest. Duek called down with his top pair and was eliminated in third place.


With 8,663 entries this year’s Main Event was the second biggest in the WSOP history, trailing only the legendary 2006 event, won by Jaime Gold with a record breaking $12,000,000. Despite all the regulations around the world, COVID restriction and more, poker is still going strong. Move from RIO to the Vegas Strip to Bally’s & Paris Las Vegas also did good for the numbers.

On top of that, qualifying to WSOP series is more accessible than it has been in a long time. Among others, new world Champion Espen Jorstad also satellited into Main Event on GGPoker. Interestingly, his opponent in the Heads-Up wore Natural8 branding.