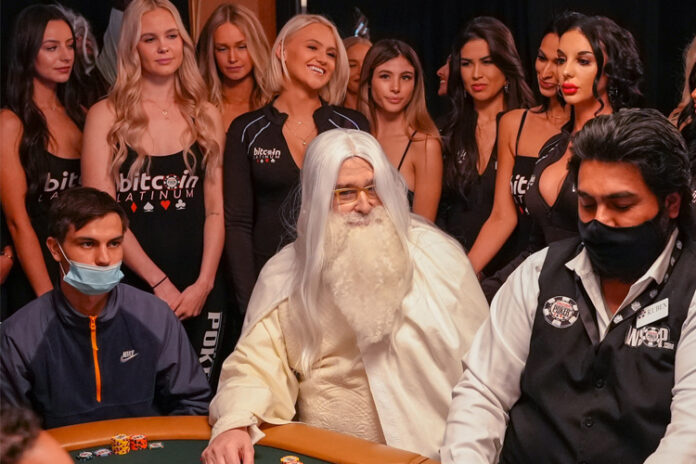 Sixteen-time World Series of Poker bracelet winner and 1989 Main Event champion Phil Hellmuth caused a commotion yet again with one of his dramatic late entrances on day 1 of the Main Event. For 2021, Hellmuth dressed as Gandalf from Lord of the Rings, complete with an entourage, his sword, staff, and his nemesis Saruman, played by recent $50k Poker Players Championship winner Dan ‘Jungleman’ Cates. Here is a look at the scenes from the Amazon room as Hellmuth arrived seven hours into day 1F.

Walking behind Hellmuth were what looked like three other characters from the J.R.R. Tolkien lore – a couple of “elves” and a number of 16 Bitcoin models – one to represent each of his WSOP bracelets.

There was no real 'White Magic' moments during the first day, as he bagged just below the starting stack before the start od day 2. Mustapha Kanit has the chip lead atop the 2,892 players returning for Day 2ABD. Kanit went from a starting stack of 60,000 to 363,500 on his first day and will be looking to use those chips in combination with his high levels of experience and skill to build an even larger stack going into Day 3.