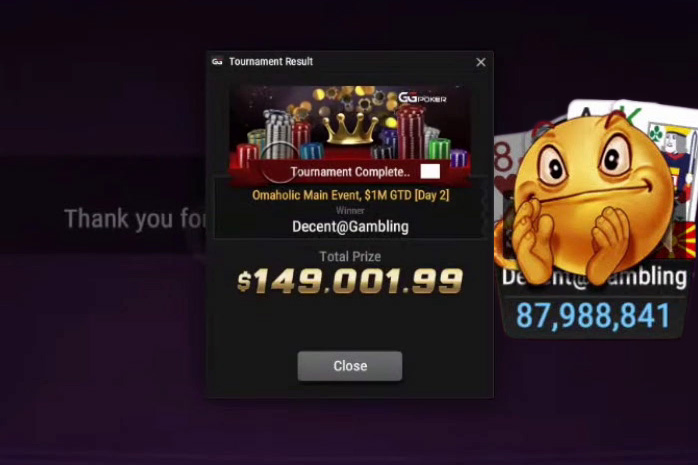 First Omaholic series on GGNetwork (Betkings, GGpoker, Natural8, 2bet4win) concluded on Saturday with a final table of Omaholic Main Event $1M GTD, which was won by a PokerPro Member ‘Decent@Gambling’! Read more about his great success in exclusive interview down below.

Omaholic Main Event was a 3-day tournament with a $400 buy-in and $1M GTD prize pool, which was surpassed as 2,862 players registered in many of the Day 1s. The special thing that made Main Event unique was that the pre-flop play was in PL format and post-flop play in NL format, which attracted lots of other non-Omaha players as well. 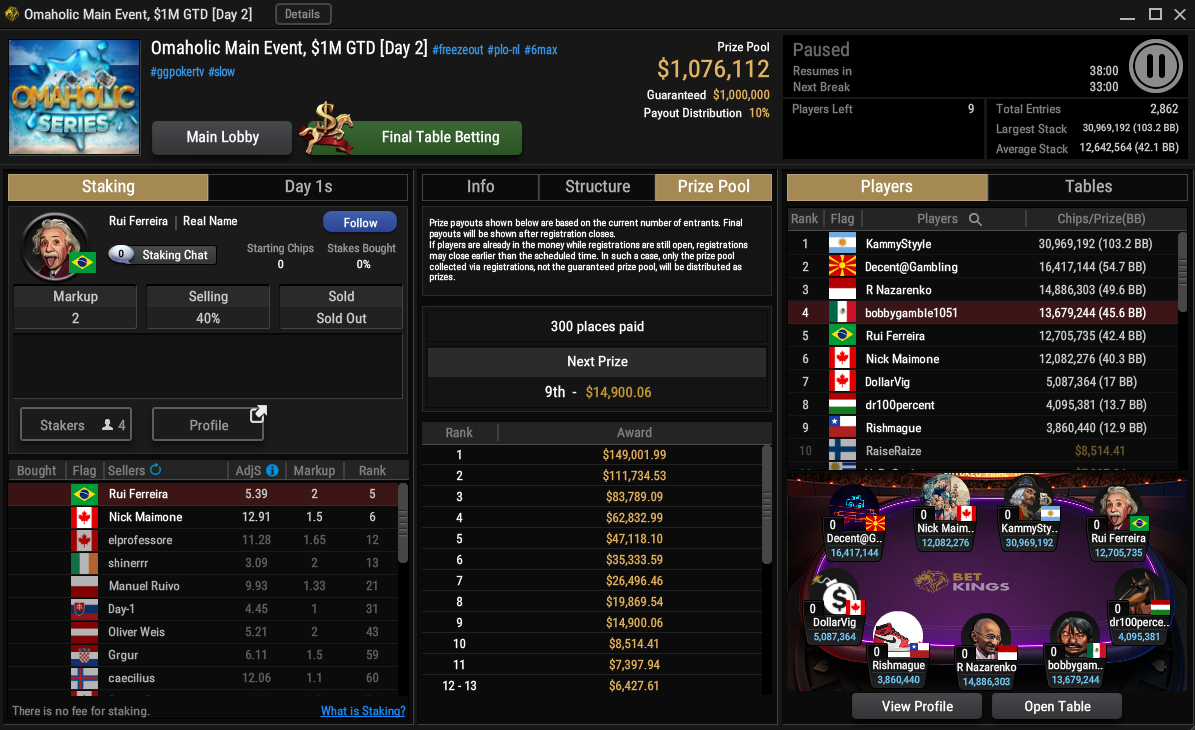 Day 2 was played down to a final table of 9 players and Decent@Gambling was 2nd in chips, behind Assad ‘KammyStyyle’ Kamran, who had almost twice as many chips as Macedonian. After only two hours of play, we’ve already got our Heads-Up for the win between Assad and Decent@Gambling, who was behind 2.5:1 in chips.

Deficit was quickly reduced to only 1.5:1 after a successful river valuebet with nut straight against two pair and in the very next hand KammyStyyle made three barrels with two pair against Decent@Gambling’s A-high flush, who took a massive lead with 92 million in chips vs. 21 million. 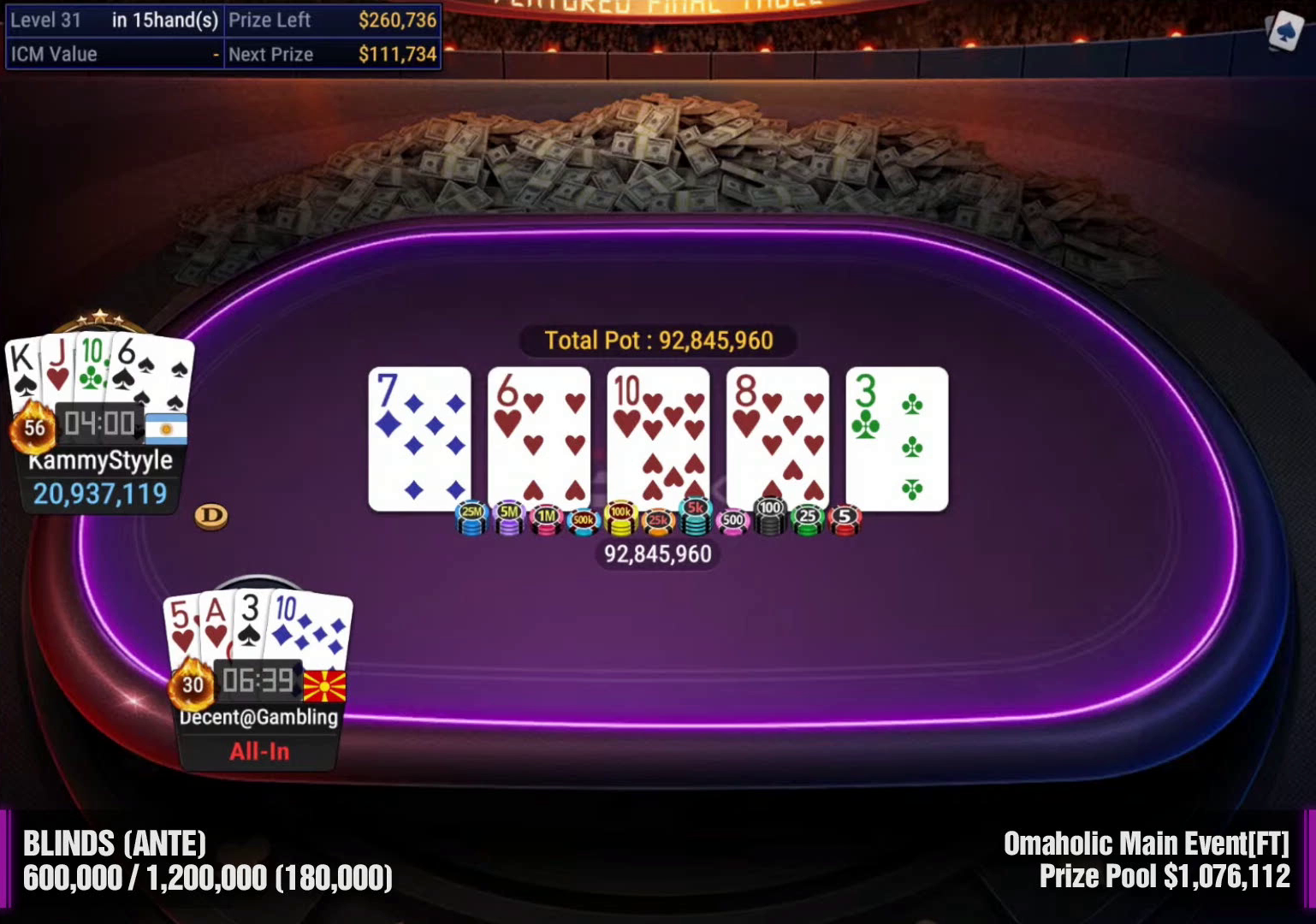 In the last hand of the tourney Kamran went all-in with pair of Qs and a flush draw, while our hero only had overcards with A and a K. A hit the turn, river blanked and Decent@Gambling was a big winner and took home $149,001! 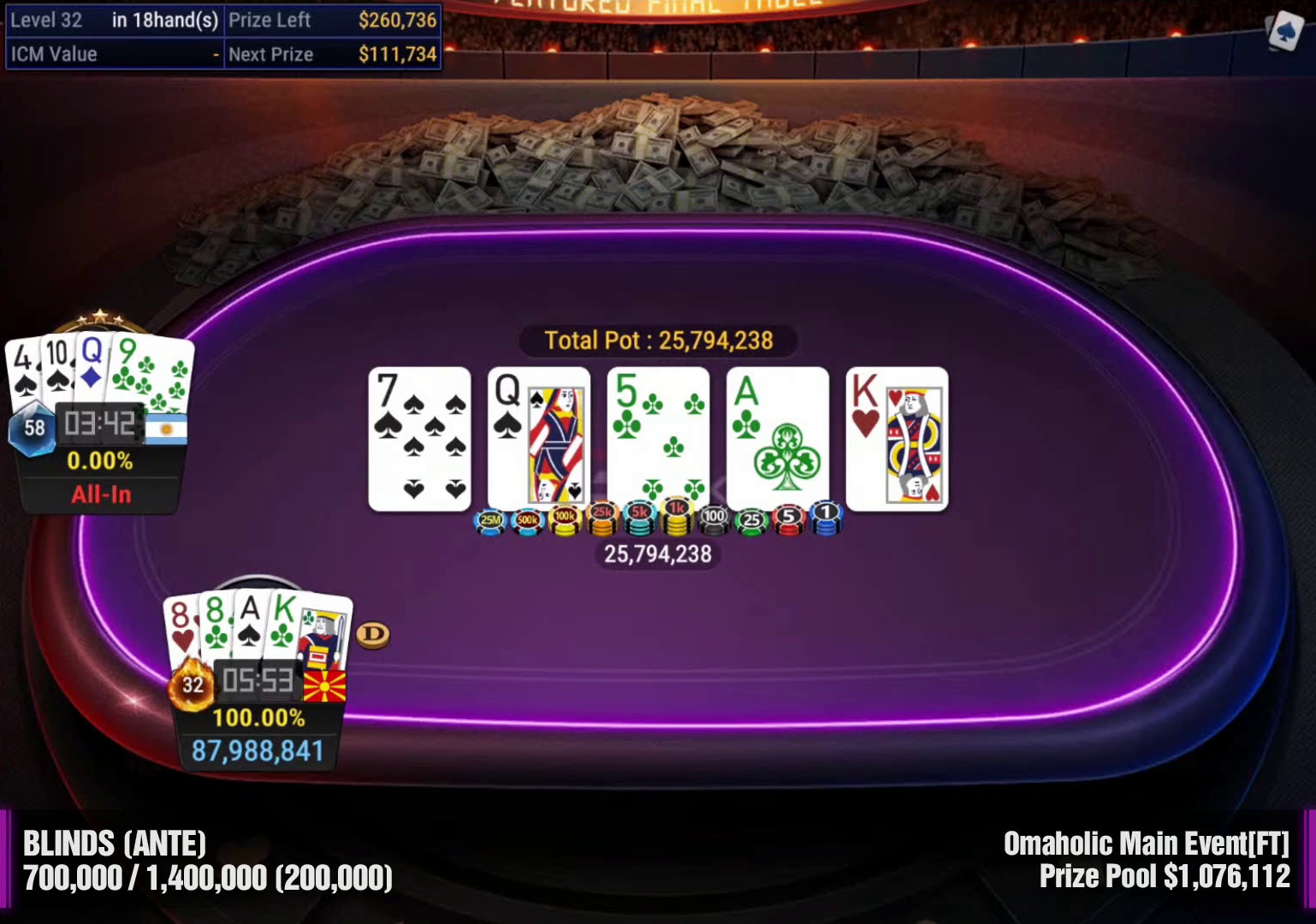 First of all, big congrats from PokerPro team, what a success! How do you feel now after a good night of sleep, what were your first thoughts today?

Thank you so much, the support really means a lot to me.

Well, I didn’t really get a chance to rest as my friends stormed into my apartment moments after I won with bags of alcohol, euphoria, and a strong desire to celebrate. I had no chance against their well developed LAG strategies.

I’m not quite sure if the dust has fully settled, but as of yet, I’m mostly fascinated by all the support that I got from my family, friends and the city of Skopje.

Went on a sick downswing in March and qualified for Day2 with the last 500 dollars that were left in my N8 account before having to redeposit. So, the fact that those were the last dollars in my account was actually a randomizer thing that eventually made me play the MTT. The kind of “let’s fire up the last money” type of logic.

Before starting to play Day 2 I promised a friend that if I cash for more than $30k that I would buy us both VIP tickets for an Eric Clapton show that’s due in 2022.

When did you start playing poker and what do you remember the most from your beginnings? You were also part of the Best poker coaching programme, what did you learn the most from this experience?

I had to have been barely 19 years old when I told my parents that I would quit law school in order to play professional poker. Funny enough my approach back then could not have been further away from professional, but somehow I managed to survive through all the hardships of coming up through micro stakes and my determination eventually paid off. I mostly remember the struggle, the frustrations, the disappointments, the doubt; things that you have to go through if you want to become a true poker professional.

The best thing about BPC was that I had the chance to meet my dear friend Alex who has become sort of like an older brother figure in my life over the years.

Which games do you usually play on Natural8, would you like to hop on higher stakes soon or will you prefer to take it slow?

Most of my volume in the past 4 months has been played on 5/10 PLO. Decent results, not crushing by any means, but I consider myself to be a developing player and I’m happy with the progress that I have made.

10/20 is honestly much tougher than 5/10, but it’s not impossible to beat, so I might take some shots this year if I feel like I can compete there, and then 25/50 and above become substantially tougher and tougher. After 25/50 it starts becoming a top 20, maybe top 50 in the world type of thing and I don’t think that I’m close to being that good right now.

Do you also like playing live poker or you prefer grinding online games? We can see how lately most of the bigger tournament series moved online. What do you think the future will bring for live poker events?

I don’t have much experience playing live and the very little experience that I have has not been too enjoyable for me. I’m really bad at remembering my cards for some reason. But, I can see a future for myself where I travel to some live events so it’s something that I’m looking to explore and get better at.

Our last question for you... What would you suggest to newcomers in poker, what is the best formula for success in your opinion?

You have to become good at being bad so that you could work on your weaknesses and you have to be ready for things not to go your way for at least a couple of years. Also just do yourself a favor and become good at “The Mental Game of Poker” by Jared Tendler.

We appreciate you taking the time to share your experiences and thoughts with our readers. PokerPro.cc team wishes you many great moments in and outside of poker and we will for sure talk soon again. Thank you and good luck!