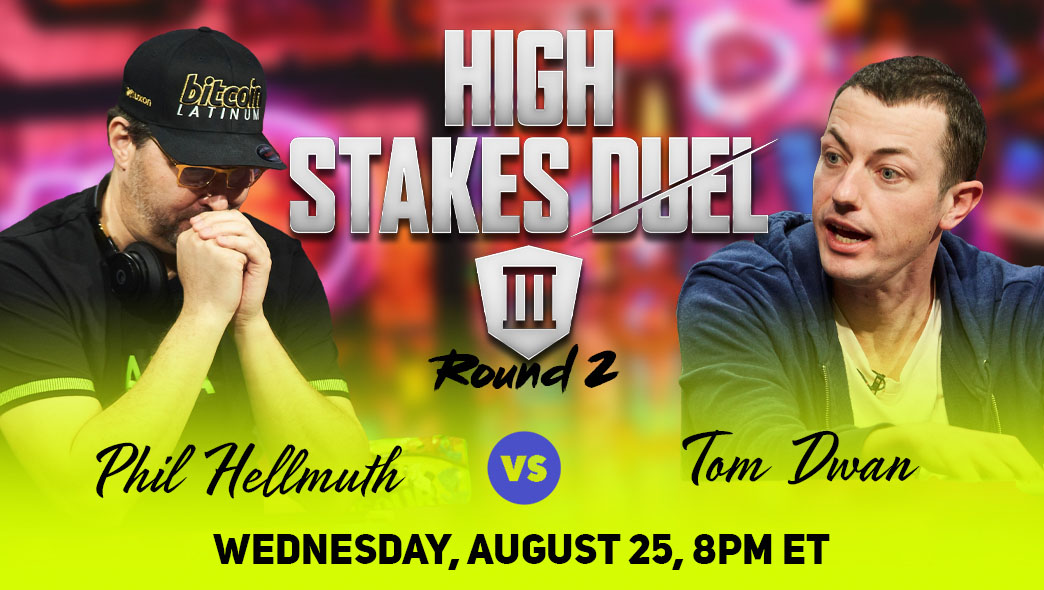 PokerGO announced Tuesday morning that Phil Hellmuth will battle Tom Dwan, known as ‘Durrrr’ in in the second round of High Stakes Duel III, where the duo will play a heads-up sit n’ go for $100,000.


In Round 1, Hellmuth and Wright bought in for $50,000 each. Days after that beating, Wright, an FS1 sports talk show host, decided he won’t challenge the 15-time WSOP bracelet winner to a rematch. Per High Stakes Duel rules, the game is still on, meaning Dwan is stepping up in relief.

If Hellmuth extends his current streak to eight with a win over Dwan, Dwan would have the opportunity to rematch Hellmuth for another match worth $200,000. If Hellmuth wins that match, he could leave and bank another $350,000 in profit.

If Dwan wins the first or possibly second battle with Hellmuth, he would be forced to play at least one more match against either Hellmuth, who would have the right to a rematch, or another challenger if Hellmuth decides to bow out.

In the scenario where Hellmuth wins the first match and Dwan takes the second, it would mark the first time that High Stakes Duel went into a fourth match, which would have a $400,000 buy-in.

Dwan made a name for himself in the poker world during the heyday of the poker boom rising up the ladder from small stakes online to the biggest games that were available. He became one of the regulars in the “Rail Heaven” games on Full Tilt Poker, a no-limit hold’em cash game with blinds of $500-$1,000.

Post-Black Friday, Dwan went on to play nosebleed stakes cash games in the live arena, traveling to Asia to play in some of world’s biggest games.

It’s a much different route than Hellmuth took to gain poker stardom, and outside of an infamous heads-up match in the 2008 National Heads-Up Poker Championship, the two haven’t clashed much.

Dwan got the best of Hellmuth during their battle in 2008 after he got all the chips in the middle preflop with 10-10 against Hellmuth’s A-A. Dwan drilled a two-outer on the turn to win the match and move on to the second round of the tournament.

Make sure you don't miss this great match. It start on August 25 at 8pm ET.